Local athletics club Holme Pierrepont Running Club hold a summer Grand Prix series each year, consisting of four races over a fortnight, on Tuesday and Thursday evenings of which you can enter all four or any of your choice. We’ve had particularly hot weather recently, and on top of working long hours I have been really struggling with my motivation for mid-week runs. I’m too lazy first thing (and running early means I can’t stop eating all day), and I’m too hot and tired in the evenings to drag myself out on my own! Therefore, a race series of evening mid-week runs was an ideal commitment, and there was no pressure to achieve a particular finishing time – I was just aiming to ensure I got the miles under my belt and enjoy the atmosphere.

The first race was a 4 mile course in the beautiful Rushcliffe country park. We set off after a short pre-run briefing consisting of “it’s pretty hot so if you feel like you’re going to collapse, stop running just before you do” – wise words! Thankfully there was quite a lot of shade as the course took us through trails and wooded sections as well as a few more exposed areas of fields and hills. It was a lovely undulating route with varied terrain and I felt very thankful to have forced myself out for an evening’s running in such beautiful surroundings, rather than being sat on the sofa watching TV moaning about how hot it is (typically British). 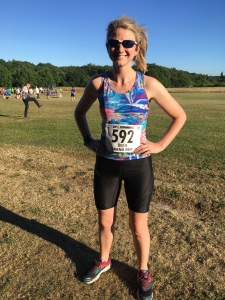 The second race was a 10km at the National Water Sports centre which is very local to me, and part of my usual running route, so a bit less exciting. I had a rare day off on this Thursday, and so took the opportunity to shake up my running routine and take myself off on my own into the Peak District for a solo fell running adventure instead! So I can’t write about the second race, but you can read about my first venture into fell running instead here, spoiler: it was pretty stunning.

I got back on the horse for race number three: a flat, fast (if you’re not me) 5km course alongside the Victoria Embankment. This was essentially a loop of an upper and inner path following the river. It wasn’t the most interesting route, but I enjoyed being able to see the other runners further ahead (or a few behind!) which distracted me nicely from the actual running. I never get more than a few seconds view of the speedier runners before they disappear, and I loved being able to see them, and feel part of the same event – albeit a mere ten minutes behind!

The final race was a 5 mile course setting off from Colwick racecourse before taking us off into Colwick park to follow a similar route to the parkrun course. I can confirm I was indeed as fast as a race horse: a hot, tired, 26 year old knackered race horse. This was the only one I didn’t enjoy as much, but only because by this stage the weather had gone from roasting but clear to roasting and very, very humid. Having made the mistake of being very hungry for previous races (as they take place at dinner time!) I’d opted for a 4pm snack to help my energy levels. Maybe the second lunch of potato wedges and cheesy meatballs from pizza express had something to do with my general feeling of lethargy! Either way it was another beautiful track, culminating with collecting my new race t-shirt which I wore to bed to celebrate! 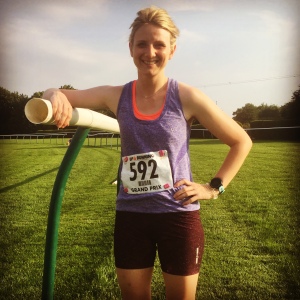 I enjoyed nearly every moment of this series, I normally hate running in the heat (hence my lack of mid-week summer motivation) – I associate being hot and sweaty with being tired, which I think in turn makes me feel demoralised and want to give up! But starting off slowly with no pressure on pace I found that once I reached a certain level of ‘hotness’ I didn’t really get any hotter. I learnt to ‘check in’ with my body: Yes I was warm and a touch sweaty (glowing!), but actually I wasn’t out of breath or tired, and my legs didn’t ache. As each race went on I found I was enjoying it more and more, managing to run each mile faster than the last, even finding some sprint finishes! They were all beautiful evenings, so I made the effort to appreciate the sunny weather – we don’t get many evenings like that in England, let’s try not to moan about it!

In terms of a review, by far the biggest thing to mention was the fantastic level of support. Particularly in the first race I barely went 30 strides before reaching another person cheering me on – be it an official marshal (of which there were many) or just a general supporter. Although I hadn’t been focusing on pace, obviously every time somebody cheers you on you must respond with a spurt in pace – and I’m sure this was a big reason why I achieved negative splits in each race! I particularly enjoyed the marshal accessories of bells, whistles and plastic clapping hands – as well as occasional bursts of music.

All the races maintained the relaxed atmosphere of a local club event, but still felt really well organised. There were multiple photographers at each race, who posted their photos online afterwards for free which was a really nice touch – although mine are fairly horrific! Each time I passed a photographer I adopted my best speedy, non-panting, composed but smiling race-face, so I’m not sure why the photos have it so wrong:

All in all I couldn’t recommend the series more highly – relaxed, friendly, supportive and a nice range of distances and routes. It was great to see a mix of club runners from across Nottingham but also plenty of us ‘unattached’ mortal folk –this really illustrates the inclusive nature of the event. And on reflection, maybe the mid-week motivation I needed of running with others – at a specific time that I’ve committed to – is a sign that I need to join a running club..