Britain’s longest National Trail, the South West Coast Path accompanies every beach in the South West of England, stretching 630 miles of beautiful coastline from Poole all the way to Exmoor. With imposing cliffs, incredible sea-views, an abundance of wildlife and 436 stiles to hop there is plenty of exploring to be had for the budding trail runner! Being based in the East Midlands I live about as far away from the sea as possible, so I couldn’t wait to lace up my trainers for some holiday running – made even for special by the fact that the path is celebrating it’s 40th birthday this year!

The South West Coast Path has a brilliant website, and you can search for routes near your location according to distance, difficulty and accessibility, with a preview of the scenery you might expect to see. We chose a moderate difficulty and medium stance route from Trevone to Stepper point in Cornwall. As we were staying in Padstow we modified it slightly to do the route in reverse, beginning in the village and heading around the coast from Stepper towards Trevone and then cross-country to take us back to Padstow harbour, plus a few extra adventures!

We set off from the centre of Padstow towards the beach but were distracted after about 500m by a crazy golf course (Greens, Padstow)! I find that all the best runs have unplanned interludes, and crazy golf seemed like a pretty good one, better than an emergency toilet stop anyway. Clad as extremely serious crazy golfers – complete with hydration packs, energy gels and sensible foot wear – we paused our Garmins and completed an excellent 18 holes with only minimal cheating on my part. I was disappointed to lose by 4 shots but did achieve a hole-in-one so I was still pretty pleased with myself. 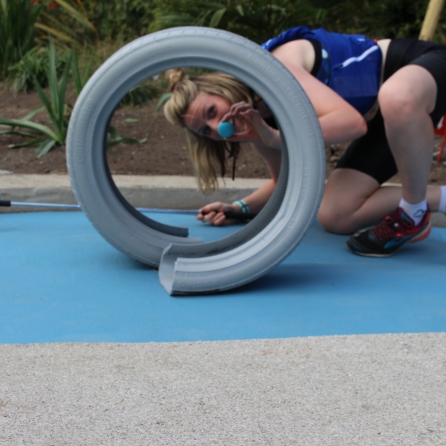 Garmins unpaused we continued from the crazy golf course up a steady incline towards the war memorial which overlooks the harbour giving a lovely view of Padstow. From here there is a path that takes you along the coastline with gorgeous beach views and the option to include a little biathlon in the form of a dip in the sea! We decided to be spontaneous and strip off our running gear for a quick swim- this was marvellous until we had to put our sandy feet back into our socks and trainers. If you’re planning a mid-run swim I’d recommend packing a small towel or baby wipes to attempt to clean your sandy feet, although I’m sure it was excellent exfoliation!

Undeterred we once again unpaused, for some serious running this time.We ran through some more enclosed paths parallel to the coastline until it broke out into a path carved into the cliff with a sign marked ‘Steppers’. This was one of my favourite sections as although the track was safe to run on there was a significant drop and the ground was undulating and varied. Being nestled within the cliff-face made me feel truly part of the landscape, and couldn’t be more different to the road-running that I’m used to at home.

As we neared closer to Stepper’s Point there were some rockier sections which were great fun to hop up and down and feel like a true trail runner. We reached the impressive 19th century tower, which was built to guide sailors into the River Camel. The view here was particularly special, and we enjoyed a brunch bar each, taking care not to let them get stolen by naughty seagulls. 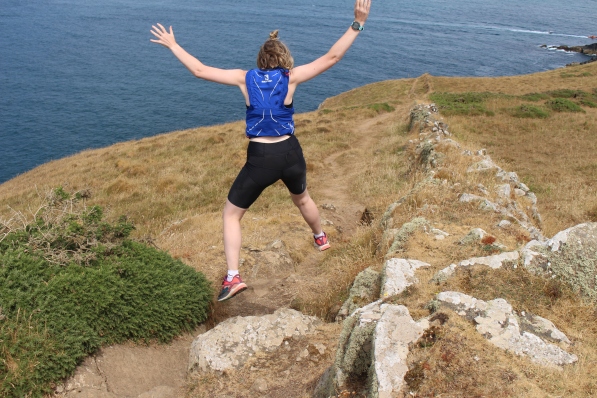 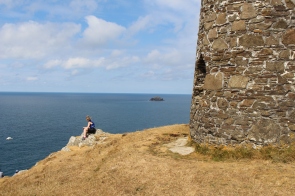 Heading down from Steppers towards Trevone the land opens up into a flatter grassy section and we ran through herds of grazing sheep, enjoying picking up some pace as the terrain was easy to run on. There was a wonderful sense of space here, and from this point on the route we saw very few other people, with most walkers turning back at the tower. The open land disappeared into a very steep cliff drop off the side, revealing a lovely little cove a long way down which we peered at cautiously from above!

The easy running turned into a rapid downhill where I enjoyed practicing my fell running descent – allowing myself to pick up some momentum and trying to trust my footfall. I’m definitely getting braver at this! As they say, what goes down must come up, and so we immediately began quite a steep ascent. Looking back at where we had run there was an impressive split in the rock, forming huge rock islands, between which you can see Merope Island. My boyfriend is a somewhat reluctant running partner, but I think even he enjoyed the feeling of looking back at a dramatic landscape and knowing not long ago you were part of it, scrambling down the rocks.

In the final section of coast we discovered an old wall to explore before turning inland to head cross-country along a few roads and across some barley fields to complete our circular route. This route made up only about 6 of the 630 miles on offer, and I wish we’d have had the time to explore more. Running has always helped me feel truly connected to my body and my surroundings, so being able to run in such an impressive landscape was particularly special. If you’ve read my other posts you’ll know I have an appalling sense of direction, which can limit my adventuring, but the South West Coast Path website gives such detailed route maps and descriptions that navigation is genuinely easy – even for a completely idiot like me. The only downside of the adventure was that I found the view of the A52 pretty disappointing during my first run back at home, definitely a bad case of the post-holiday blues.

To celebrate and support the South West Coast Path, there is a #40for40 campaign with the aim of trying to raise £40,000 towards the maintenance of this beautiful section of National Trail to mark its 40th birthday. If you’d like to find out more or consider contributing please do check out the information here.