About two months ago I entered my third ever triathlon, Coalville Triathlon. I was planning on doing lots of excellent training, from brick sessions to swim drills. But life happened, and I just didn’t manage to fit it all in.

This triathlon was particularly special to me as it was to be the first time I’d ever worn a tri-suit. I was given a beautiful teal suit from Flare Clothing Co. which felt brilliant. But it was also a bit scary, because suddenly I looked the part – which was alarming.

Seeing as training hadn’t gone to plan, I prepared by painting my nails to match my tri-suit. This made me feel much better until the alarm went off at 6am, on a Sunday.

I paired my wonderfully co-ordinated outfit with a pair of wellies, to take the dogs out for a swift poo. Don’t worry – the thing attached to my parent’s delinquent dog isn’t a shock collar, it’s a Tractive GPS tracker. He likes to walk himself to local bins and other delicatessens.

Before I knew it I was tottering the wrong way down the edge of the pool to line up for the swim. I always find it really tough that you don’t get a trial length to check if your goggles are leaking or your nose clip is falling off. Luckily none of those things happened, and the first few lengths felt pretty good.

Just so you know, I am a rubbish swimmer. But this is absolutely fine at a triathlon! I did my first one completely in breaststroke (along with loads of other people), so I was super proud that today I did 15 out of 16 lengths in front crawl. I’ve had a cold which meant I struggled a bit with my breathing. I took a few extra breaths at each end, and did one length in breaststroke to settle it down again.

I ran to the transition area repeating “put my helmet one” loudly, I’m sure this helped many others not forget. When I got there I realised everyone else had brought a towel to dry their feet. This was an excellent idea, as it took me about 2 minutes to cram my wet feet into my socks whilst trying not to fall over (must get back to yoga). I really wanted to use someone else’s towel – but I promise I didn’t. 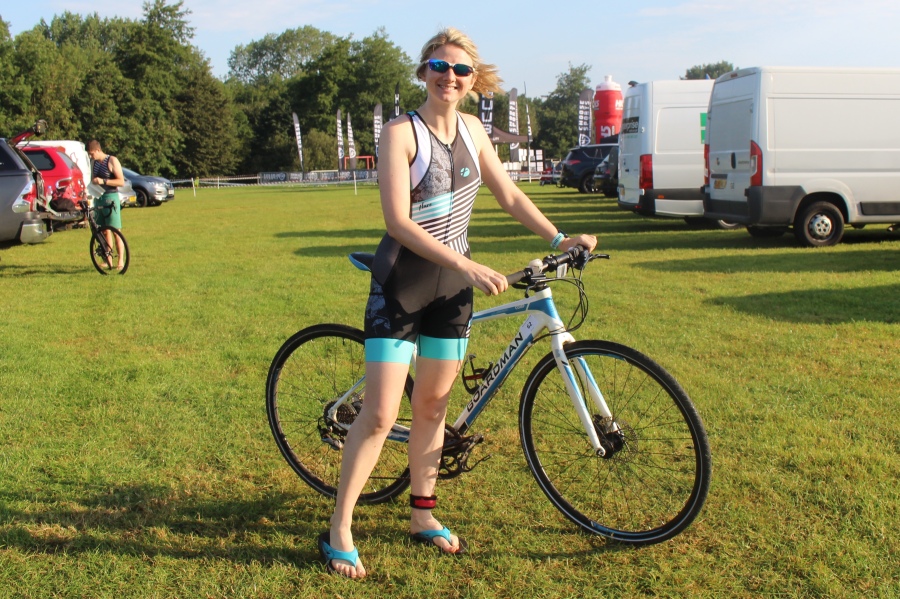 I hopped on my bike, rounded the corner and soon faced a giant hill. In the briefing they were talking about a particularly giant hill. So, assuming this was said hill, I put my head down and put my heart and soul in to getting up the monster. I even passed a few people (competitors this time, not people walking with prams). At the top there was a bend, and then – disaster. Around the bend there was another giant hill. Well, I had to get off.

To impart a top tip – have a look at the elevation profiles before the race. Honest to God, I don’t think my first car would have got round that course. As hill after hill arrived, with no hope of a single flat metre I discovered that the secret is all those tiny gears I’d never used. This is the sort of thing you figure out in training, so it’s definitely worth doing some of that.

I spent the first lap either running up the hill with my bike or clinging to the handlebars for dear life hurtling down at nearly 30mph! There was nothing in-between. Luckily it was a two-lap course, so I got the measure of the hills, and managed to stay on-board for the entirety of the second lap.

The best thing about not having a road bike – every time you get overtaken you can tell yourself they’re only faster because of their fancy bike. Pretty sure the reality is I wouldn’t stay upright for more than one minute on a road bike, I can only indicate left as it is.

Joking aside, I was really proud of myself as I cycled back in to the transition, as it was probably the hardest cycle I’d ever done. Unfortunately that didn’t bode well for my legs in the run!

By the time we started running, the beautiful morning had turned into an absolutely scorching day. I’d forgotten to bring a water bottle for my bike so I was probably fairly dehydrated by this point, and I did really struggle. But the reason I like a sprint distance is that I do regularly do all the distances on their own – so there really was “only a parkrun to go”. I also break marathons down into parkruns, I thoroughly believe you can do anything if you can do a parkrun (or 8 and a bit of them).

The run course had several loops back and forth, so there were a few people I knew to say hi to – these interactions started off with big high fives, and by the end were barely perceptible grimaces. But it was still nice to feel you were in it together.

I managed to drag about 5 metres of a sprint finish out of somewhere and suddenly it was all over! Hills aside, it was a beautiful course on a beautiful day and I really did love nearly every minute, so thank you Coalville!

Before the race I was a bit sad that the first time I’d wear a tri-suit I wouldn’t be able to live up to it. But the whole way round all I kept thinking about was all the people I’d told this week that I was doing it. Even though I told them I’d be totally rubbish, they still thought it was amazing! Nearly every single one also said, “I could never do a triathlon”.

So when I was catching a breath holding on to the end of the pool, or walking up the hill with my bike, or puffing away in the run on my jelly legs which never wore off – all I thought about was that sentence: “I could never do a triathlon”. That’s exactly why I was doing it, and why it didn’t matter one tiny bit that I didn’t get an amazing time. I was doing it to show all those people that think they can’t because they can only do breaststroke, who don’t have a roadbike, who have to stop and walk – in the bike or the run.

I didn’t let my fancy new tri-suit down, I just showed what a wonderful sport triathlon is. Because if I can do it, anybody can! Never limit yourself with “I can’t do that”.

Feeling confident is a huge barrier to women in sport, and for me having kit that not only performs but makes me feel good is a huge thing. So, the lovely team at Flare Clothing have offered me a discount code to share with you all, to give you 10% off all their lovely stuff. It’s 10THISVETRUNS and you just pop it in the promo box at checkout.